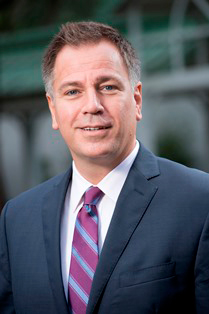 Marc Orlando is the Town Manager of Hilton Head Island, South Carolina. Marc was appointed by the Hilton Head Island Town Council in December of 2020, and assumed his position in February of 2021. In this role, Marc directs the administration of Town departments, implements policies and projects, and oversees about 250 employees.

Most recently, he was town manager of Bluffton, South Carolina, where he was instrumental in the planning and implementation of the town's two major economic development initiatives, the Bluffton Public Development Corporation and the Don Ryan Center for Innovation, and led the town's major investments at Buckwalter Place Commerce Park, Palmetto Bluff, the Bluffton Historic District and other locations.

During his 14-year tenure with Bluffton, Marc helped the town manage through a period of unprecedented growth and economic success that included Bluffton's annexation phase when it skyrocketed from a one-square mile town to a 54-square mile town. Marc's work in Bluffton garnered him state recognition in 2012, when South Carolina legislators awarded him a House Resolution that honored his "visionary leadership" in community planning and environmental stewardship.

Early in his career, Marc worked for the Town of Hilton Head Island as an intern, GIS analyst, and senior planner. Along with his public service, Marc also served as the Vice President of Asset Management with Rowe Investments and managed several commercial and residential projects.

Marc graduated from the University of Windsor with a bachelor's degree in urban and regional planning with a concentration in business administration. In December 2013, the International City/County Management Association (ICMA) awarded Marc the designation of a credentialed local government manager.

He currently lives on Hilton Head Island with his wife, Jaclyn and two children, Emmy and Ben.